“We Listen” Came to an Successful End 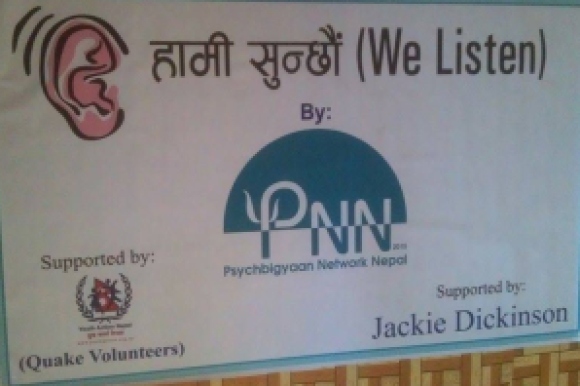 Psychbigyaan has yet another important accomplishment in its record. With the aim of providing psycho-socio support to the earthquake victims temporarily sheltered in Tudikhel Camp and supervise psychologically to the care givers and service providers, Psychbigyaan had started a 15- day psycho-socio support Program , “We Listen” or “Haami Sunchhau” from June June 10 to June 28. It was started with the support and collaboration by Youth Action Nepal and funded personally by Jackie Dickinson.

Psychibigyaan members Sujan, Kripa and Sanjeev conducted the program over 15 days between 3:30 PMto 6 PM everyday . Psychbigyaan team used the tool of active listening and prepared the questionnaire as per PFA (Psychological First Aid) and Solution Focussed Approach. The team conducted one to one session with the 70 +50 affected people varying from teenage to old age. The latter 50 people were taken as subjects to conduct a survey of the possibility of psychiatric cases of the people staying over the camp.

The program was revolved basically on four basic aspects i.e rapport, reflective listening, need assessment and intervention. The team found majority of the people to be distressed which was slowly decreasing with the time which were expected like sleeplessness, feeling edgy, irritation, laziness, fear, anxiety, loneliness, sadness etc.  Considerable number of people were fine and had very little distress whereas very small minority i.e 2 people were found to have dysfunctions. Those 2 people were the cases of relapse of psychiatric condition after the earthquake.

Besides psychological problems, many other social problems were found out due to the aftermath of the earthquake. Psychbigyaan team found out the increasing marital tension between the spouses, poor living condition of the people, increasing poverty, privacy problems specially for young teenage girls, increasing teenage love, anger management issues, aid dependency, idling around , huge chances of girls and women trafficking and very serious effect on the education of the children.

The team believes the program to be successful because many people reported their stress level to had gone down after talking to the team members. Such programs are necessary in other camps, shools and in the community as well. The team is very thankful to its partners, Jackie Dickinson for her immense support and Youth Action Nepal for providing space for the program. Psychbigyaan team strongly feels the immense sense of satisfaction and  success over the completion of the program. No-doubt this will be registered as an important milestone in the work history of Psychbigyaan.

All the contents, posts, pages, images, videos and other materials are properties of Psychbigyaan. These can't be used or published in other platforms or medias of any form without our prior consent. If you want to use any of our content, then please contact us at info@psychbigyaan.com