On Saturday, 13 December 2014 Psychbigyaan organized the twitter chat on Mental Health condition in Nepal with professionals and stakeholders.  The event was held for an hour from NST 7 pm to 8 pm.

Notably three persons involved in Mental Health shared very important views about the condition of Mental Health in Nepal:  Sujen Man Maharjan who is working  as a  ‘psychosocial field officer’ in ICRC Nepal , Bijaya Gyawali who is a ‘practicing clinical psychologist’ in Japan and Dr. Anupam Pokharel, a ‘psychiatrist’ practicing now in Australia. Along with them several interested students of psychology were involved. In the question regarding the overall mental health condition in Nepal, the professionals held the belief that it disjointed in which in one extreme it is extremely medicalized and other extreme trivialized. Concerns were raised about its increasing importance but on the contrast less awareness and seriousness towards this neglected field. But some were optimistic with the recent development on the field. 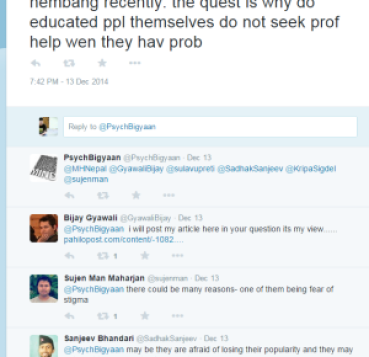 The issue of giving license to clinical psychologist with the proper recognition by the government and the collaboration of clinical psychologist with psychiatrist was discussed because their less collaboration has led to over medicalization of mental patients. The differences between the mental health system in the developed country like Japan and Nepal was discussed in which it was suggested Nepal should be focusing on producing more trained human resources.

Some of the psychology students raised the need of the proper documentation of the data and information regarding mental health so that they can be readily available and raised the question about the proper authority from which information can be extracted and obtained easily.

The topic of the mental tolling of civil war on the victims of it was also discussed. In the interaction the war victims were said to have been affected on various levels-individual, family, social and so on. Their integration was said to be possible if there would be disintegration of pre-existing relations and the acceptance from family and society at large.

The hot topic of suicide was also broached upon on the discussion. The cause for this in the modern time was suggested  mainly for increasing unemployment and decreasing social relations.  The stigmatization of mental problem in our society was considered to be the major barrier of reporting  of the mental problems to the concerned persons. This has led to the tragic consequence of increasing suicide even among educated youth as in the recent case of famous celebrity Alok Nembang. The solution suggested for de-stigmatization  of mental problem was the continuation of awareness in the large scale despite it taking too long time and it should be focused on all the professionals as well. The induction of mental health in the school curriculum was also suggested for the effective destigmatization.

Henceforth, the one hour lively and interesting twitter chat came to an end with the positive feedback from the participants. The participants were hopeful of such social media discourse in the coming future as well.

Everything is very open with a really clear explanation of the challenges.
It was truly informative. Your website is useful. Thank you for sharing!

I’m gone to convey my little brother, that he should also visit this weblog on regular basis to
get updated from hottest reports.

All the contents, posts, pages, images, videos and other materials are properties of Psychbigyaan. These can't be used or published in other platforms or medias of any form without our prior consent. If you want to use any of our content, then please contact us at info@psychbigyaan.com